Some years ago a friend of mine (Tom) played me some songs he was tinkering with on his laptop. I think he was angling to get me to record them properly, but with no budget he had to resort to (un)subtle methods. Maybe it was just good timing. The few songs I heard were completely different to those he writes with his band Babyhead, with whom I had produced a couple of albums. I had not been creating music for a while since my band had fizzled out and was looking for something to get my teeth into aside from the usual audio work. I was also starting to build a new studio (Sandpit) as well as embarking on the journey into parenthood. Tom’s music drew on themes of childhood nightmares and English folklore, his rough demos were layered up with sampled acoustic instruments, and the long poem-like lyrics were delivered in a fragile melodic style I had not heard from him before. I offered to help produce this work and see where it lead. Quickly our joint musical buddy Brian joined the fray, adding a necessary counterbalance to the rather dark tendencies Tom and I share (musically that is) as well as working as a vocal producer while I became busy being a dad and studio designer/builder.

The Ghost Smoke project, as it has been known, started off with an aesthetic framework based on acoustic instruments, no samples or synths, and a bias towards the atmospheric over the musical. The other major point was that mine and Tom’s joint adoration of Tom Waits would not overtly influence the work.

Cut to the present. The tracking for the Ghost Smoke album was completed at the end of 2014. We blagged loads of excellent musician friends, recorded in bedrooms, rehearsal spaces and basements, wrestled with arrangements, and inevitably compromised on nearly every single intention we had! Yep, there’s electric guitar and bass all over it (my bad!), a sampled Mellotron appears on one track (couldn’t blag a real one, and it’s been processed to fuck anyway!), and there’s no hiding our love of Tom Waits (luckily I’m an average guitar player so I can’t pull off a full Marc Ribot impression). Most importantly we have loved making it, however drawn out the process or far off the completion, and we hope others will share our enthusiasm, especially as that might be the only payback we get from this personal indulgence.

Tom, Brian and I managed to find two days in December 2014 where we could sit together in the Sandpit control room and edit down the bulging multitracks for the twelve songs on the album. We then scattered to the four winds with the agreement that I would get the mixes up to scratch for a final run through and tweak before moving onto mastering and distribution. Building the studio, as well as trying to earn a basic living, left me scant time to do any such thing, and the longer I left it the harder it became to sit down and start mixing. More than a little conscious of this I decided to set myself a gateway task to kick things off, hoping that things would gain momentum and confidence from there. The latter point is an important one as I’ve not mixed an album of this kind for a long while, and mixing is all about confidence for me. I picked a track where the vocal is, for the most part, coupled with a simple acoustic guitar. In fact, it’s set against a double tracked recording of ‘The Dog’, a crappy japanese nylon string acoustic that I love despite its honky tone, terrible action/intonation and its dog-chewed headstock. I have to credit my long time friend and guitarist dude Roger Watson for managing to record the guitar part with the Dog – I tried and failed as I just don’t have the finesse, being a bass player who mostly abuses guitars. Anyway, I wanted the vocal to feel present and intimate, but be able to fly off into the wind during the second verse as the blowing of the North wind and the crashing of the sea fill the moonlit scene set out in the lyrics. We haven’t gone for the rather corny and literal foley approach and used crashing waves and whooshing wind, but there’s plenty of modulated tape hiss, verbed out guitar and breathy bass clarinet to set the scene. I’ve been mixing in lunch breaks and the odd hour when I’m waiting for sealant to dry, so progress has been sporadic, but a momentum has begun to build. I etched away at the aural picture created by just the acoustic guitar, tape hiss and vocal in the verses, leaving out the explosive choruses (wailing theremin-like female vocal, drum kit, double bass, electric guitars, harmonium and bass clarinet) until I was happy with the main lyrical balance.

The tape hiss comes from the harmonium overdubs I made on a Tascam 34B 1/4″ 4 track I’ve had in for repair. As it hasn’t been calibrated I thought it would the ideal candidate, along with some old 3M tape stock that shed oxide like a shaking wet dog, for re-pitching the early 20th century church harmonium I have (it’s almost a semitone sharp of A440 pitch). Though it’s only played in the choruses I recorded throughout the verses to get noise and hiss, as well as some creaking and breathing sounds as I sat at the harmonium occasionally tapping keys, shifting in my seat and pumping the bellows. A double track of this stuff, panned hard left/right, really sets the scene. This technique was used on a few tracks on the album. Here are some audio examples so you can hear what I’m on about…

Next, tapemonium with the ‘Dog’ acoustic guitar and electric guitar buss…

Finally, the same section but with the whole mix in to give an idea of context.

And here’s some photos from the sessions. 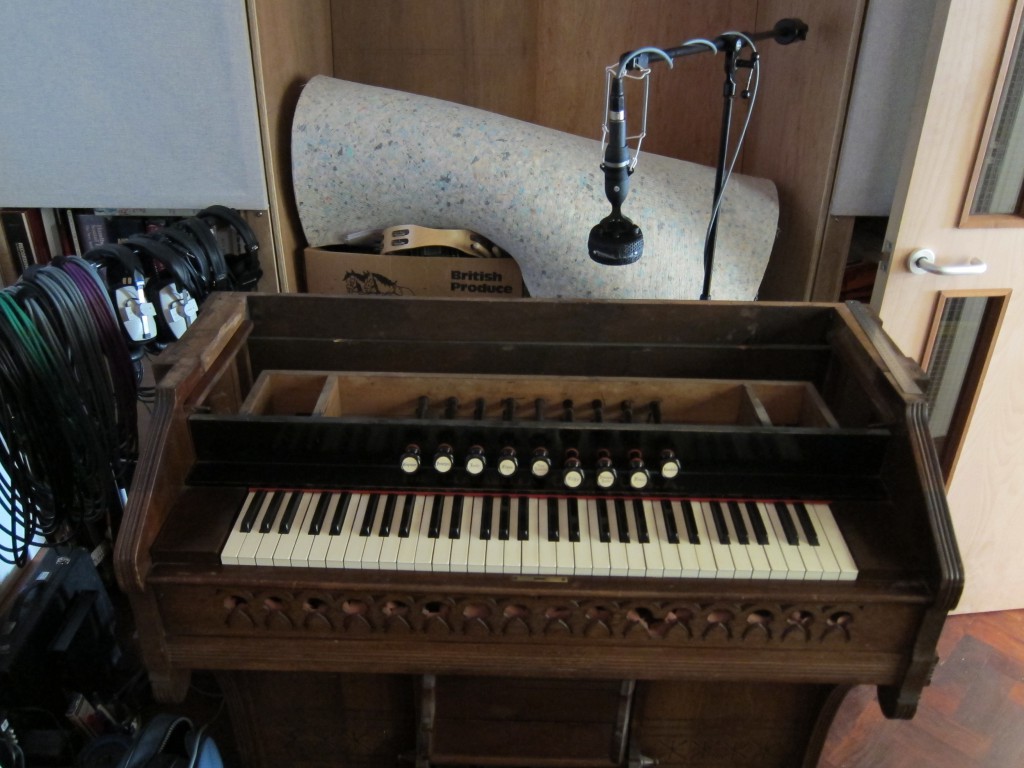 Tascam 34B 1/4″ 4-track winding away. Don’t be fooled by the Ampex 456 spools – I put on some old 3M/Scotch 250 that left oxide piles after every take – keeps you from playing too many takes though.

At the time of writing I have mixed 4 of the 12 tracks for the album and will try and write some more about the process as it has been scary, fun and deeply satisfying.