Before mixing for the Ghost Smoke album started in earnest we created a provisional sequence which, at the time of writing, still stands. As with most albums, there are tracks that have definite roles: openers, enders and the ‘big’ one. The opener, ‘THEM’, is a no-brainer here as it’s sort of the title track; the chorus contains the lyric “Them were the Ghost Smoke”.

Having cracked open the mixing with ‘DRMs’ (see part 1 of this mix diary), the third track in the sequence, I decided to go back to the beginning and mix from there. It seemed as good an approach as any, especially as the narrative that runs through most of this record is established in this first song. ‘DRMs’ was mixed entirely digitally, with the exception of a touch of tape echo on the vocal courtesy of my beloved 1965 WEM Custom Copicat, but this is so far the exception. Having cleaned up all the edits for ‘THEM’ I zoned in on Tom’s vocal

and played around with a few options to set the tone. The digital options weren’t satisfying me so I quickly ran it out through some outboard gear in search of better/different. Sure enough, after a bit of routing on the patchbay I had the vocal running through an EQ and two compressors, both nibbling the dynamic range by a couple of dBs each either side of the EQ (for the geeks it was a JDK Audio R24 EQ, an ART PROVLA valve compressor and a solid state BSS DPR402 compressor/limiter). 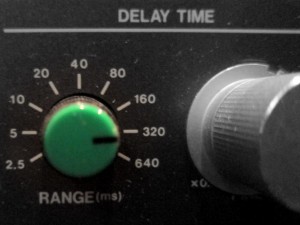 In mixing ‘THEM’ I set a routine that has continued throughout he following mixes (at time of writing this I am five tracks in) which revolves around a few pieces of outboard equipment. Firstly there’s an 80s digital delay (a Boss DE200) which is perfect for helping a vocal sit out in a mix without having to necessarily lifted in volume. It distorts easily, has very limited high frequency response and is simple/fun to use – less is definitely more. At the other end of the fidelity scale is the Kurzweil K2600, a true behemoth of a synth/sample/effects unit. To use it requires digesting two enormous manuals, which I did many years ago and haven’t looked back (well, occasionally when I get lost in the operating system). This provides, in this context, 8 channels (or 4 stereo channels) of plush effects, the highlights of which are the reverbs. These beat the pants off any plugin reverbs I have and has now become my ‘go-to’ space-maker. The mix for ‘THEM’ created a template approach for all proceeding mixes with the K2600 providing a room for the vocal, a different room for the bulk of the instruments (drums, percussion, guitar, bass, piano, etc.) and a large hall/chamber type for occasional spacey elements (music box, strings, spooky vocals and the like). 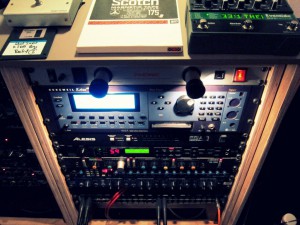 This record has been created over a long period in small blocks and so nothing has been recorded in parallel, with each instrument being added as and when musicians could be convinced to play for us. This piecemeal approach can make it difficult to create a cohesive sound, and it is during mixing that any lack of coherence becomes painfully obvious. I like to think we have managed to produce a core ‘band’ sound on each track, whilst being able to adorn the basic track with all the twinkly bits we wanted to bring the songs, and especially the narrative components, to life. Often this was achieved in reverse as songs, such as this one, started off with sampled drum loops and some scratch instrument tracks to record the vocals to, but along the way we added things like strings (violin and viola courtesy of Sarah Anderson) and piano (Benji Bower and Ian Ross) long before recording the backbone drums/bass/guitar. The drums for ‘THEM’ were tracked at Babyhead’s rehearsal space with Alex Lupo in a series of sessions in which we made him play increasingly bizarre setups (one included a snare drum covered in pasta to be struck with a giant lollipop). This track was a little more straightforward with only a knackered old marching bass drum representing the freaky side. A few old ribbon mics were thrown up and boom, we were done. It was probably a year before I got around to adding the bass, two electric guitar parts and lap steel (I also added a zither played with teaspoons for good measure). The trick was to make this sound like it was really some people in a room, playing off one another. I hope it achieves that.When starting a mix I like to imagine where it is taking place, or where the listener is. It may be something as simple as a church hall or a swampy shack, or it can be a series of different perspectives shifting throughout the song. Having set the basic vocal sound, along with a little Boss DE200 delay tucked in behind it, I look for a suitable place to put it, focussing on where the voice is in relation to the listener. For this track I used a simple room simulation, keeping it small and personal during the verses, but (via means of automation) expanding the space around the voice for the choruses to support a more grandiose delivery. As with ‘DRMs’, the mix process lingers on the vocals for quite some time before I pull in any other elements, seeing how far I can get the vocals alone to work as a song. Once it feels no further progress can be made, a few basic instruments are pulled in and sculpted to form a suitable bedding for the vocal. If there are backing vocals they will be in the mix before any other instruments, as again the voices are the most important parts, even if they occupy a background placement. The last section of ‘THEM’ features Ellee, Tom’s wife, singing a reprise of the chorus. This sets up a female counterpart to the male voice throughout the record, though it is not always Ellee. The role calls for a spectral quality, a voice at some remove from the real; ambiguous in age, purpose and corporeality. This required shaving out some mid frequencies that we use to judge distance, but without creating a shrill top end, a problem alleviated by using subtle distortion and compression. As well as getting sent to the Kurzweil big room reverb (along with a zither, accordion, lapsteel, piano, music box and a multi-layered Brian singing ‘Them’) the Ellee vocal was passed through an Eventide Modfactor, a stereo guitar effects pedal that I have semi-permanently patched in for mix purposes.  This gives a shimmering tremolo effect to further enhance the spectral quality. Most of the subsequent mixes have featured this pedal strapped across stereo back vocal groups for either tremolo or rotary speaker effects, as this helps them catch the ear without taking over the foreground which needs to be kept clear for the lead vocal.

The key sound, aside the vocals, is the music box. Tom had created the music box parts included in the bulk of the track long before any of the other recordings were made, and these really set the tone for the record, like a short form for childhood nightmares and hallucinations. The intro to the song takes a mashup of the drums, some twisted bits of Ellee’s later vocal and the winding up of the virtual music box that is the Ghost Smoke album. I also have to credit my Mum with recording the music box sounds used in the into which she captured on her iPhone when visiting an acquaintance who collects the damn things – yay Mums.

I had intended to write about a few mixes in this post, but instead I’ve blathered on about the opening track, so without further ado here is a sampler of sounds from ‘THEM’, in isolation and from the final mix.