The build is now under way at Sandpit following a few weeks of prep (see previous post). Though some gear has gone to temporary accommodation and a basic rig is sat under the stairs at my house, including the 25kg-a-piece Event Opal monitors which may have rattled window frames a few streets away when I made a batch of bass samples at home! 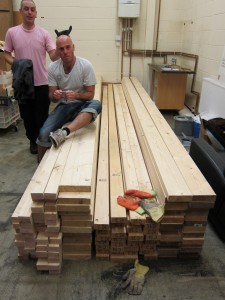 The first major construction job has been the control room outer stud frame, which has meant filling the limited floor space of the studio with a not inconsiderable pile of timber, seen here accompanied by Roger and Brian who are voluntarily sharing construction duties…fools.

The photo to the right illustrates this initial space issue, which has now eased due to some of the gear pile being redistributed to houses and onto the temporary storage platform above. Now the stud frame for the outer shell of the control room is up we have some clear space to work in, until the mineral wool and plasterboard get delivered. 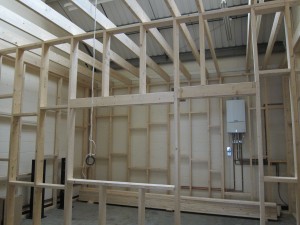 At the time of writing the control room outer shell stud frame looks like this – the 2″ x 8″ beams are just propped in place to select the best lengths of timber. The stud wall in the foreground shows where the window and door will go. Once the beams are in place the mineral wool, deadsheeting and plasterboard layers will be applied before the inner stud frame is constructed on a float of high density mineral wool. Work has come to a halt for a few weeks now as I am taking paternity leave, though still awaiting the arrival of the child at the time of writing.

In the mean time I have taken delivery of these two shiny new Carnhill transformers (VTB2281s) which will serve as the output bridge from the JFET992 based mix-buss amplifiers in the 70s Midas PR mixing console mentioned in previous entries. Can’t wait to wire ’em up and hear how they fit in. Having chosen the final modifications for the input and group channels there now remains the not-insignificant task of cleaning/lubing old pots and faders, cleaning some switches, recapping and making a few other circuit adjustments. The main monitor section has been designed and now requires final component selection and layout (buffers, multi-gang rotary switches, stepped attenuators, etc.) – this is obsessive’s heaven.